skip to main | skip to sidebar

past shows and commissions

I encourage the viewer to journey
through the shows of my past
as well as appreciating my current works.
To be accepted into a show is a triumph,
a celebration, a validation of one's art.
Putting together a show, a group of works
intended to be seen together as a whole,
is a labor of love and I believe that it is important to
view the paintings within this context
as well as individually.
...
I have found that the advent of the
affordable digital camera has
made this process much easier.
As a result, the visual history of
the shows in which I have participated
is a very young one.
...
"The best time to plant a tree
was 20 years ago.
The second best time
is now."

Painting the nude... it's natural.
Freedom from the trappings of time,
removing the masks.
We were born naked
with a natural freedom of expression.
Perfectly.

This was a wonderful community event
to support and promote Preservation Kentucky.
Local Art in the Highlands is "the convergence of art,
community, faith, and activism in Louisville's Highlands."
They curate a series of quarterly art shows which bring together
the communities of local artists and activists for a local cause.

Hosted by St. Andrews Episcopal Church, each show features
many local artists that create and submit work for a specific theme.
Door fees, portions of vendor sales, and art commissions are split
between St. Andrews and the co-sponsor the each particular show.

The art shows are curated by Kim Torres and Sandie Griffin,
of Lucent Dreams Photography and Art from the Heart Gallery. 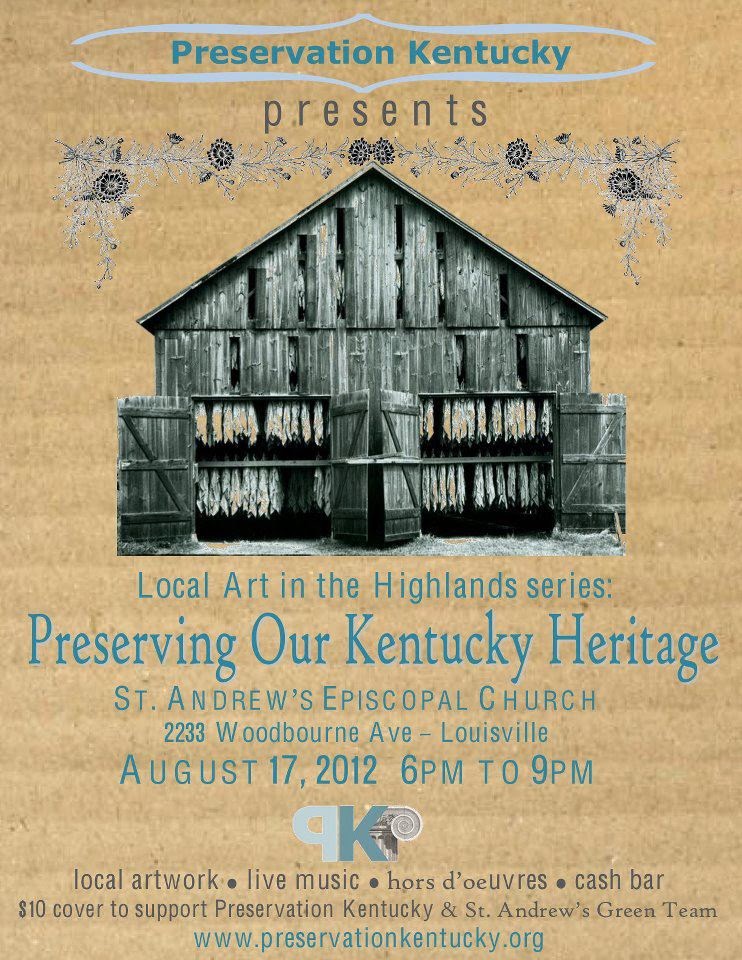 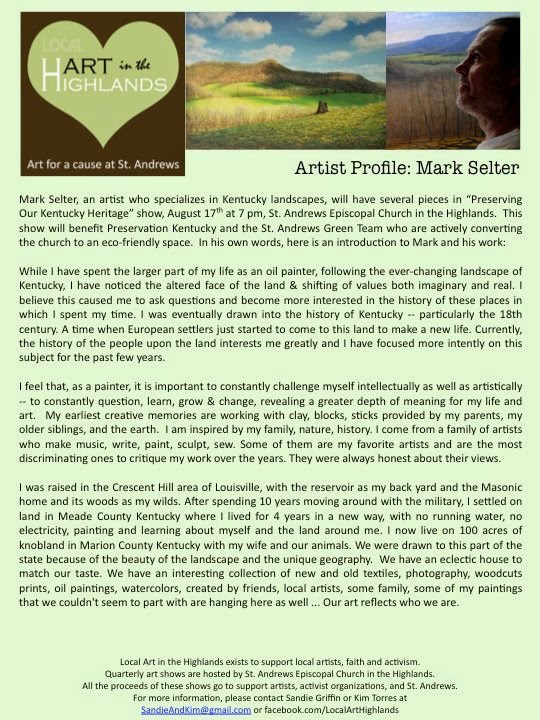 In spring of 2012, I was commissioned to create
a painting for the newly constructed
Marion County Judicial Center
in Lebanon, KY

It is beautifully framed and hangs
on the ground floor near the entrance area.

figured OUT: explorations of the human form

This show featured an eclectic mix of artists from Louisville
and surrounding areas and had two artists' receptions
which coincided with the Frankfort Avenue Trolley Hop.

The show received a favorable review by Keith Waits. 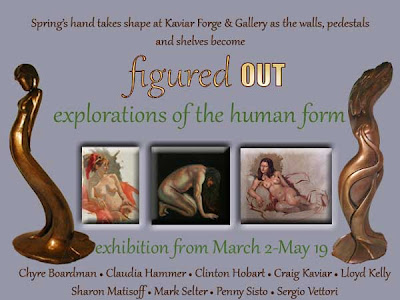 Following, are the show announcement
and images of the four paintings that I  contributed to the show. 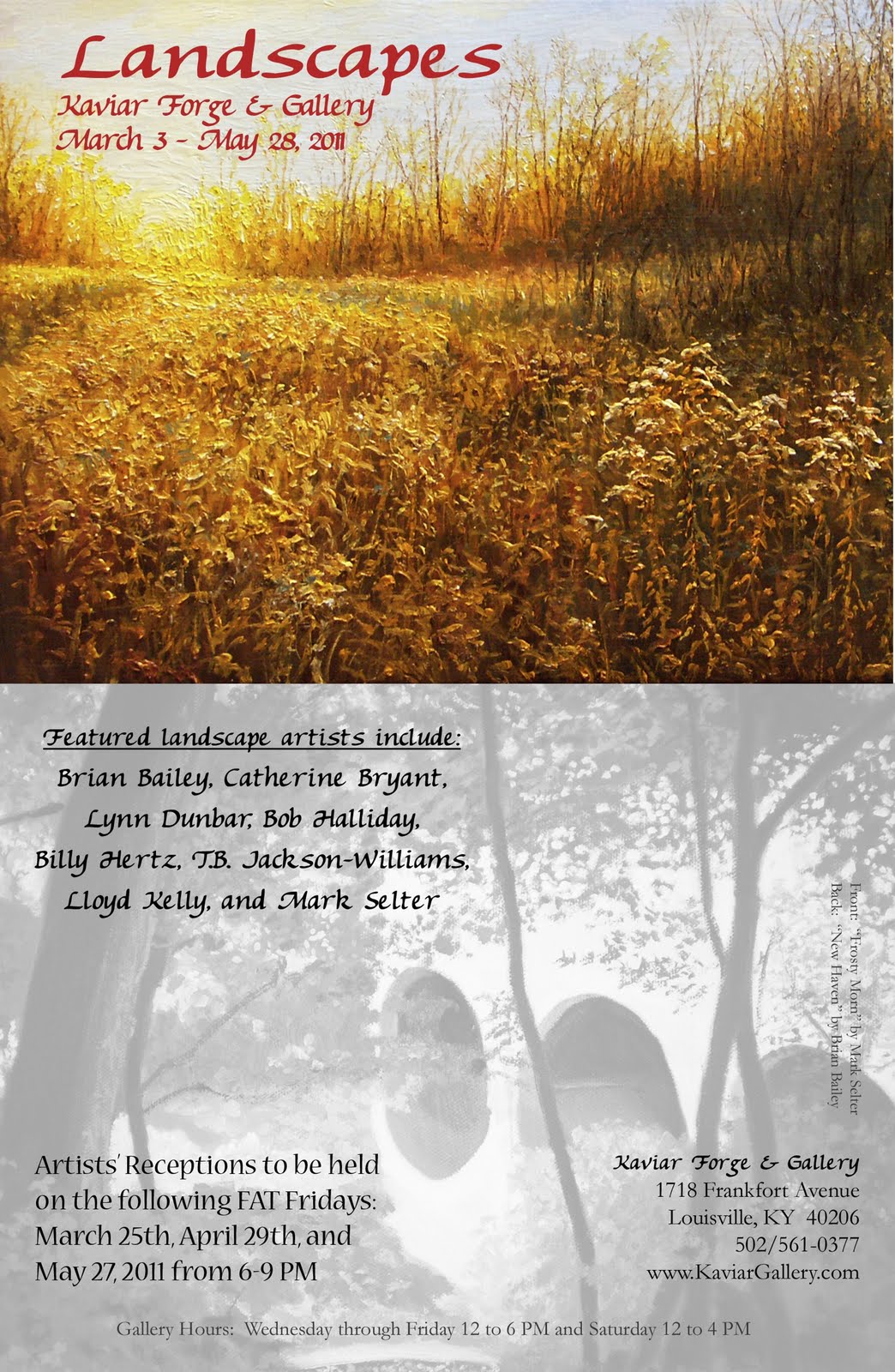 Blair, the gallery director, created a very nice press release
for the event and the show received an enthusiastic review from
Louisville Arts Review. 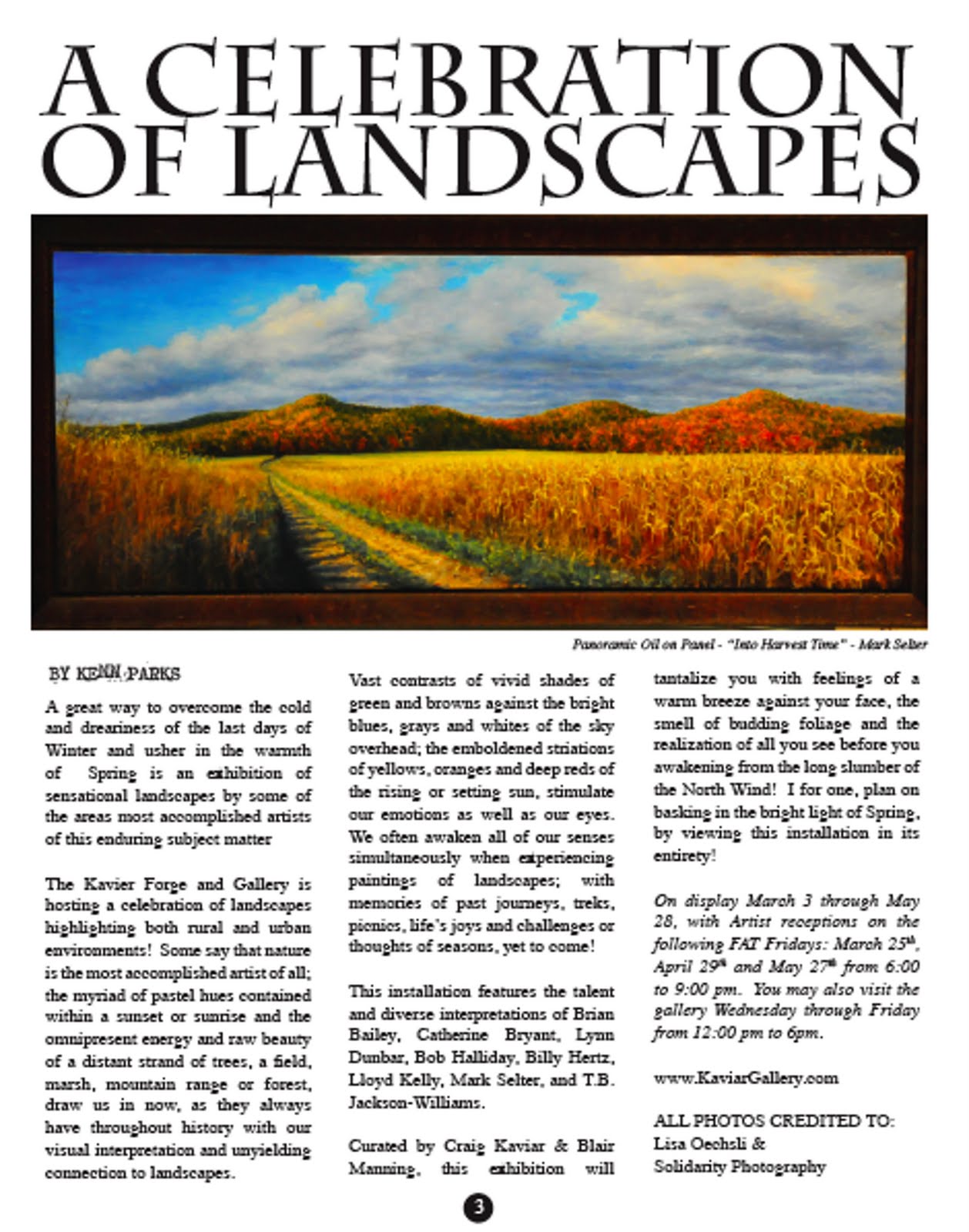 Thanks to our local gallery, owned by artist Jama Watts,
this show was made available to my community.
The importance of providing art to local regions
which possess no museums
and few, if any, galleries cannot be overstated.
These Precious Things provided the perfect
venue for this group of paintings.

These are just a few photos of the very special
opening and artist's reception at Tim Faulkner Gallery.
The show was installed beautifully by Tim and Margaret.
The room looked perfect- even more so,
when it filled with family and friends, old and new,
who came out to show support for me and to celebrate art in general.
It was a wonderful evening.
Many thanks to all who helped to make this happen. 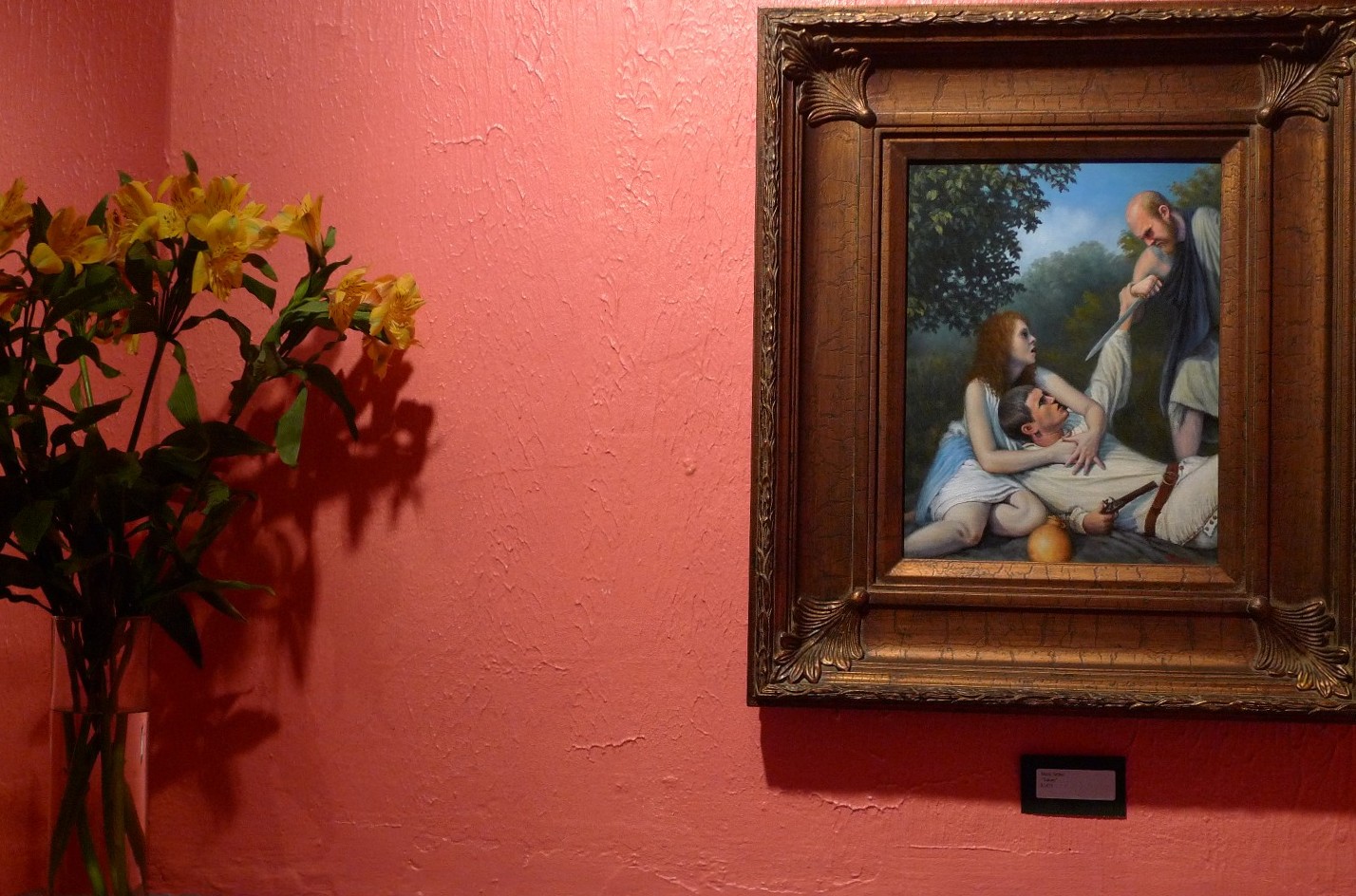 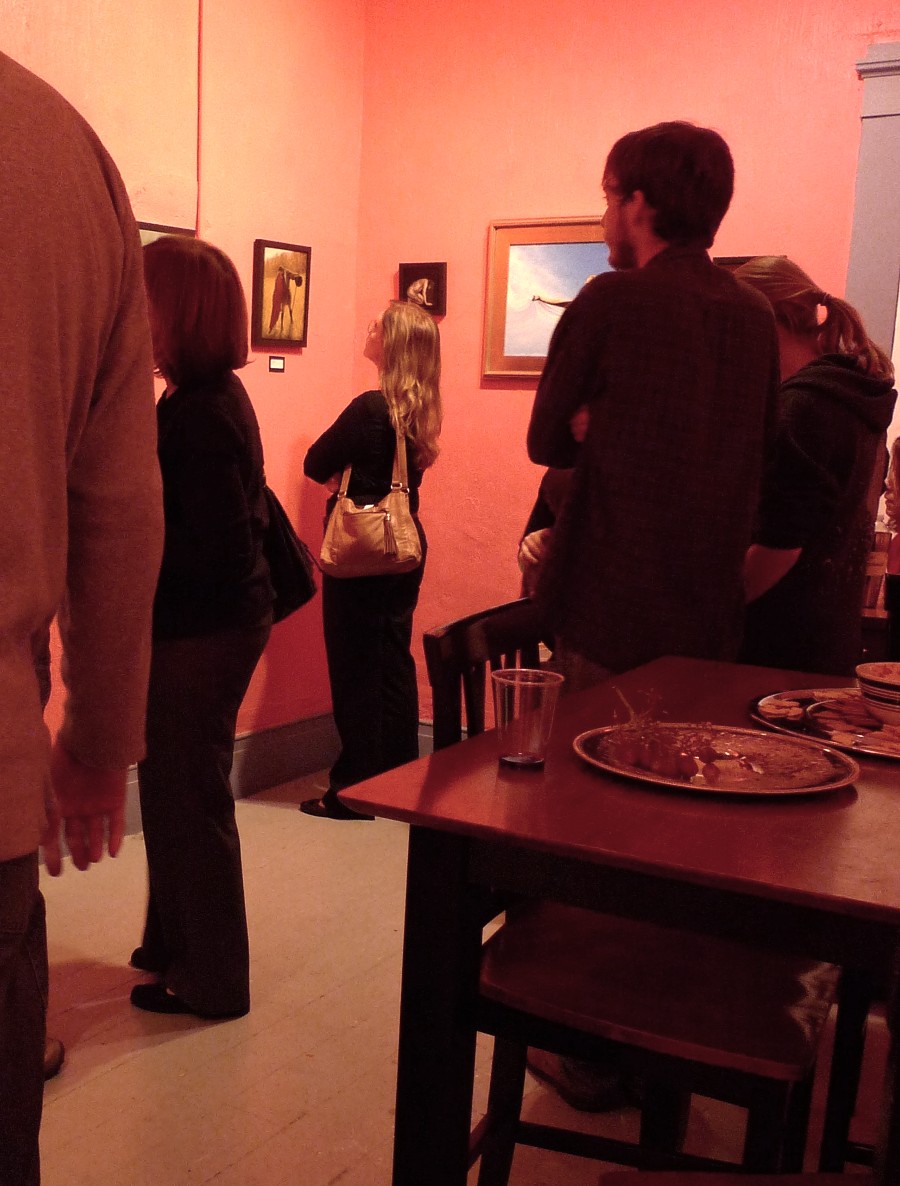 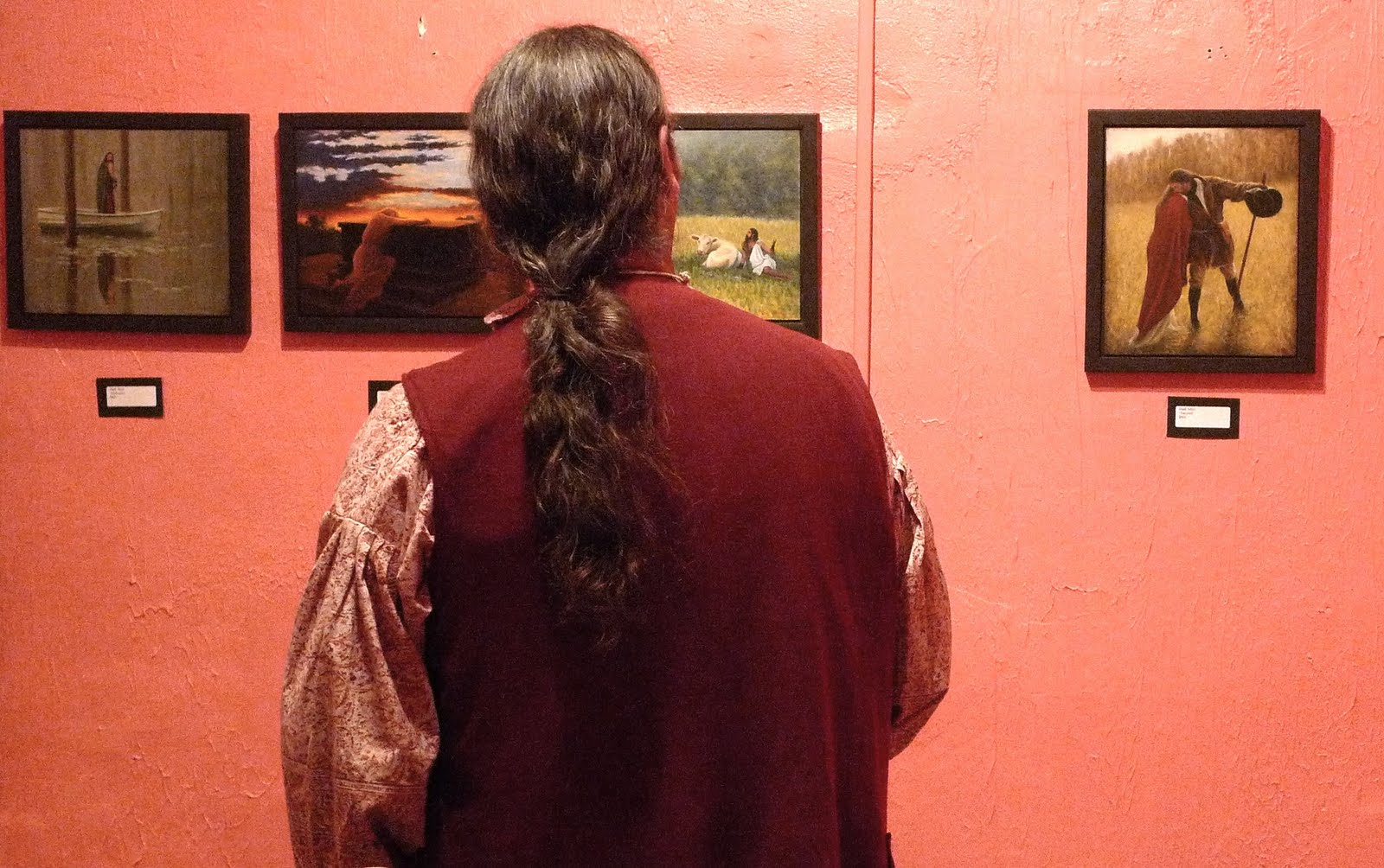 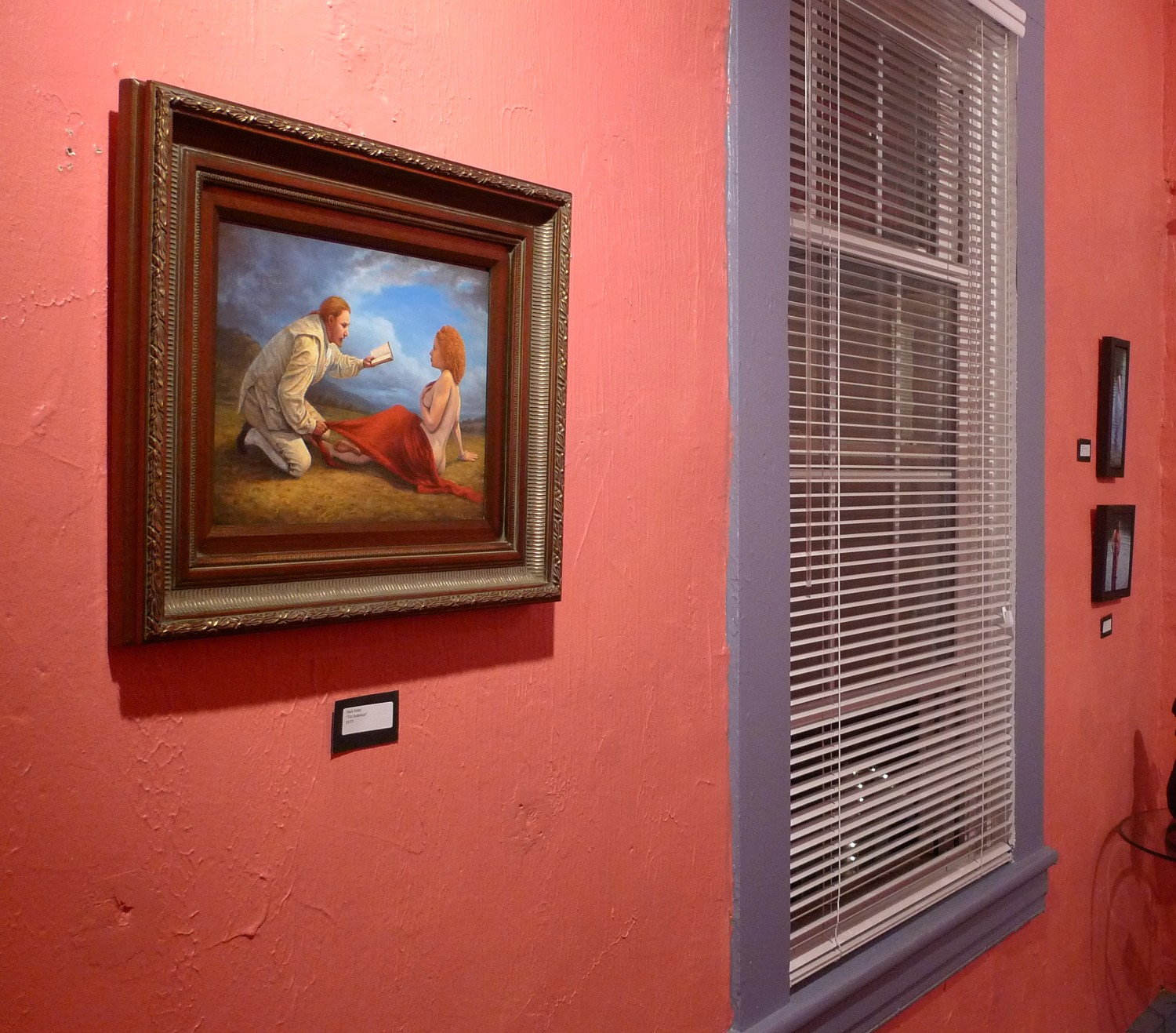 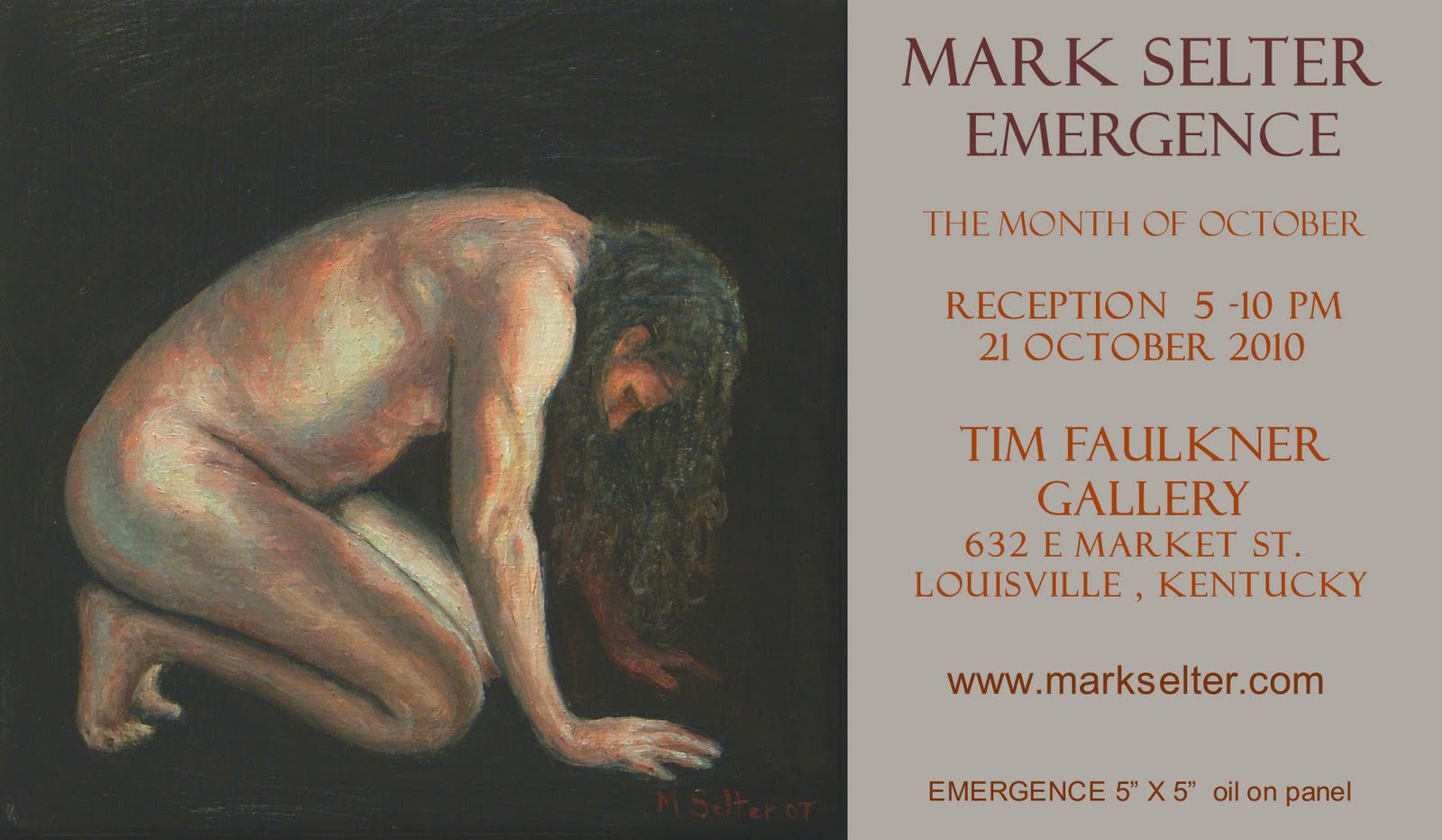 I had the good fortune of being able to follow
a few of my neighbors for several years
in the field, barn, and market during the tobacco season.
These paintings are the result.

A hand is a bundle of tobacco with a leaf tie.
A hand is a farm worker.

"These small paintings
represent
brief moments in recent history
of the relationship between
tobacco and man."


(all of these paintings have been sold)


A fleeting moment, a space of time or a feeling, a view...
these are the things that inspired me to create this group of paintings.


(all of these paintings have been sold)

Donation to a Fundraiser

"Dirty Painting", unframed oil on canvas, 7" x 14". In support of my local community and the arts, I have donated this painting to Marion County Arts and Humanities Council's annual art auction fundraiser which has a retro 50's theme this year. The event takes place November 1st. To learn more, click the painting to be linked to their facebook page.

To Resupply Lewis and Clark


This painting was sold in the 2010 Louisville Visual Art Association/UofL Hite Art Institute art auction to help fund LVAA's Children's Fine Art Classes and the Hite Art Institute's Mary Spencer Nay Scholarship Fund. The asking price was $1500. and I am proud to announce that it sold for $1700. with 50% of the selling price being donated to the cause!

The Murder of Captain Abraham Lincoln 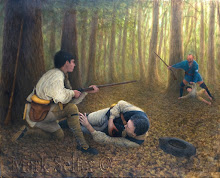 In 2008, I was commissioned to work on this very large project for the city of Springfield, Kentucky in Washington County: I embarked upon an extensive research into the clothing, arms, and way of life of early Kentucky settlers as well as the many accountings of this event which occurred in the late 18th century. Local people were used as models and a local landowner in the Beech Fork River Valley, where the Lincoln family once lived, allowed the use of his property to set up the reenactment/photoshoot for this project. The resulting painting is inspired from a compilation of the many stories and myths depicting the death of Captain Abraham Lincoln. Washington county fiscal court owns the painting which was presented to the public in an unveiling ceremony in 2009. It measures 48'' x 60'' and now resides as a permanent installation in the Lincoln Legacy Museum located in the old courthouse in Springfield, Kentucky.